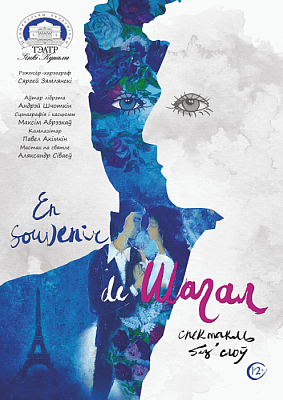 The story of life and work of one of the most famous painters of the XX century, a native of Belarus, Marc Chagall, will be presented at the Janka Kupała National Theatre.

The new production En souvenir de Chagall will be directed by Russian director Sergey Zemlianskiy. The opening performances will  be performed on 14 and 15 of March; the next shows will be performed on 26 and 27 March.

Marc Chagall is one of the most outstanding and remarkable avant-gardist painters of the first half of the XX century. He never forgot about his native Viciebsk as it had given him precious childhood recollections he would transform into his paintings and the love of his life, beautiful Bella. The new production is a free interpretation of the first period of his life and work, from his birth in Viciebsk to Bella's death.

The premiere is created in collaboration with a Russian production team. The show is directed by Sergey Zemlyanskiy, Russian director and choreographer who has created more than 20 productions in Russia, Latvia, Israel; his next project will be directed in South Korea. The genre he works in is called 'wordless performance': the story is told by dramatic actors with the help of the body language, without any words.

The libretto was written by Andrey Shchetkin. The score is composed by Pavel Akimkin. Lighting is designed by Aleksandr Sivaev, winner of the Golden Mask.