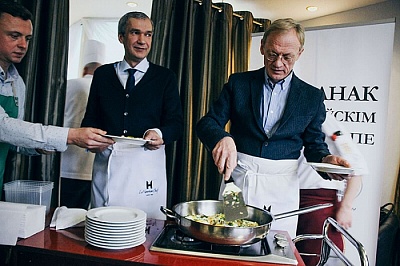 On 29 November the first issue of the Kupalauski Magazine was presented at Hotel Europe. During the press breakfast General Director of the Janka Kupała National Academic Theatre Pavel Latushka unveiled new projects which the theatre was going to realize in its 100th season, Artistic Director Mikałaj Pinihin told about the production plans of the theatre, and the Head of Drama Department Volha Babkova told the public about the theatre magazine. Dźmitryj Sadoŭski, the chef of the hotel, added a tasty and pleasant touch, omelette.


According to Volha, the first issue of the magazine will include interesting stories, historical accounts and photos from the heart of our theatre archive, information about the premieres, interviews with Mikałaj Pinihin, Pavel Latushko, and Zoja Biełachvościk, short anecdotes from Hienadź Aŭsiańnikaŭ, and lots of other information about backstage, tours, and everyday theatre life.


During the press breakfast Andrej Jarmoła, the director of Europe Hotel, and Pavel Latushka, General Manager of the Janka Kupała National Academic Theatre, signed the agreement on informational cooperation. According to this agreement, guests of the hotel will be able to buy the tickets to the theatre with the service of simultaneous translation included free of charge.
← Back to list