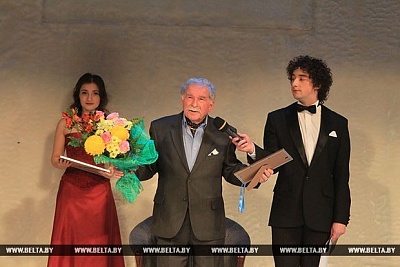 Hienadź Aŭsiańnikaŭ, People's Artist of the USSR and Belarus, has been awarded the Victor Hugo UNESCO medal and the diploma of the Director-General of the UNESCO Irina Bokova.


Hienadź Aŭsiańnikaŭ, along with Raścisłaŭ Jankoŭski and Tamara Nižnikava, People's Artists of the USSR, became the first Belarusian citizens to be honoured with such an award. The official awards ceremony was held at the Janka Kupała National Academic theatre; it was participated by Aleksandr Michnievič, the First Deputy Minister of Foreign Affairs, and Pavieł Łatuška, the Ambassador Extraordinary and Plenipotentiary of the Republic of Belarus in France.

Victor Hugo UNESCO commemorative medal was founded by the United Nations Educational, Scientific and Cultural Organization in 1985 to mark the centenary of the prominent French writer's death. The medal is bestowed upon cultural figures from different countries for significant contribution to the development of national cultures and cultural diversity in the world.
← Back to list