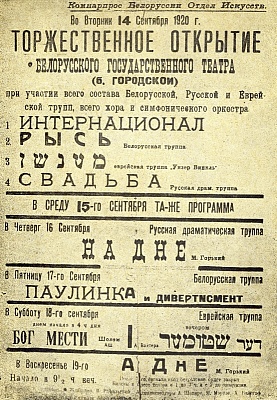 The Janka Kupała National Theatre will celebrate its 95th anniversary this year. It was founded on September 14th, 1920, when the Belarusian State Theatre was opened in a building at Petrapaulauskaja street (now 7 Engels Street).

"We are going to stage a festive show in two acts on September 15th", says Mikałaj Pinihin, the artistic director of the theatre. "We will perform The Sphynx by Octave Feuillet in the first act, as it was the first play to be staged in our building in 1890. In the second act, we will recall legendary performances that are no longer on, Tribunal, The Remembering Prayer, Harold and Maud, The Locals, and other plays."

Any anniversary is always an occasion to think about achivements and experience, to review the past to know where to progress in future. Turning 95, the theatre certainly has a story to tell about the past five years. The biggest news lately was the completion of the profound reconstruction of the building of the theatre, which lasted 2010 through 2013. It was aimed to reconstruct the appearance the theatre had in 1890. The project task force has been doing research in archives for more than two years, scrutinizing photos, videos, and design projects, so that the font and home decor would look the same way as back in XIX century. The spectators' cloakroom was expanded and located at the ground floor premises. A rehearsal room located by the entrance to the dress circle was rebuilt to become a roomy foyer with two fireplaces. The auditorium was renovated, so now it seats 360 spectators. They can make themselves much more comfortable, as big chairs were placed in it with large aisles between blocks. The auditorium was also re-floored, the floor being reshaped from sloppy to stepped, and a ventilation system was installed under it. Figured partitions between boxes were constructed according to drawings. Even the grey-and-blue colouring of the interior was reconstructed. The stage was enlarged and made deeper by more than four meters. All the technical equipment was replaced.

Despite its considerable age, the theatre actively introduces modern technologies. After the re-designed website kupalauski.by (winner of the TIBO prize) had been launched, you can buy tickets online in a few munites. English-speaking visitors can use an English version of the site, and simultaneous English translation of performances is available to foreign spectators since the previous season. 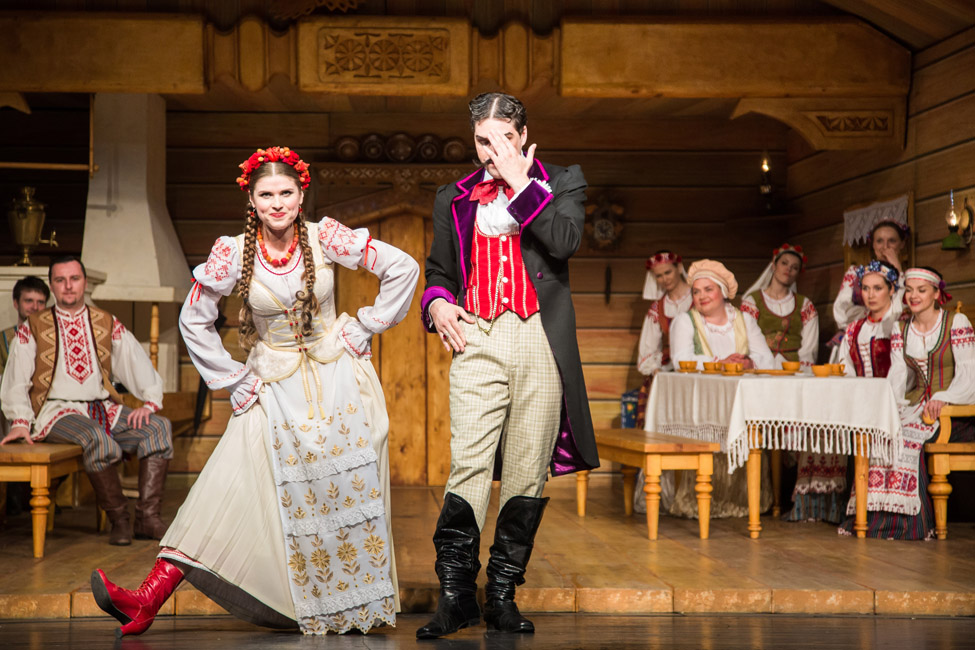 Despite the facts that the theatre had no venue of its own for several years and had to perform at rented venues of the Palace of Culture of Trade Unions, the House of Officers, Minsk Concert Hall, 12 premieres were staged in the Janka Kupała Theatre, and a renewed version of Paŭlinka was staged. Since 2009, when Mikałaj Pinihin became a new artistic director, the theatre directed its efforts to present less-known works of the Belarusian culture: works of Franciška Uršula Radzivił, the founder of professional Belarusian theatre, Western Belarus cabaret, history of Belarus through the famous poem Pan Tadeusz by Adam Mickiewicz. 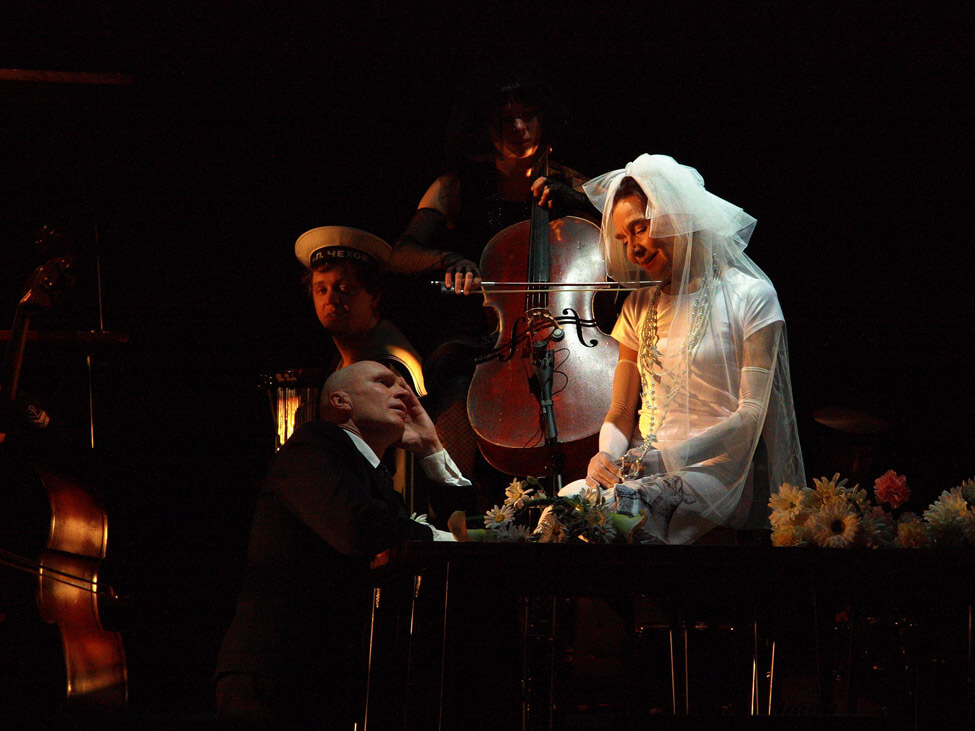 The theatre has also been touring actively, performing in Warsaw, Kyiv, Ulyanovsk, Riga; Wedding was performed at venues in Madrid, Cherbourg, Paris, Dieppe, Louviers; Uršula Radzivił’s Theatre was performed in London. For the third time since the World War II, the Janka Kupała Theatre came to Tomsk, the city which saved the theatre in 1940-s. Our theatre was the first Belarusian dramatic theatre to take part in the Beijing Spring Theatre Festival in March 2013, and we will hostthe Beijing People's Art Theatre in October 2015. 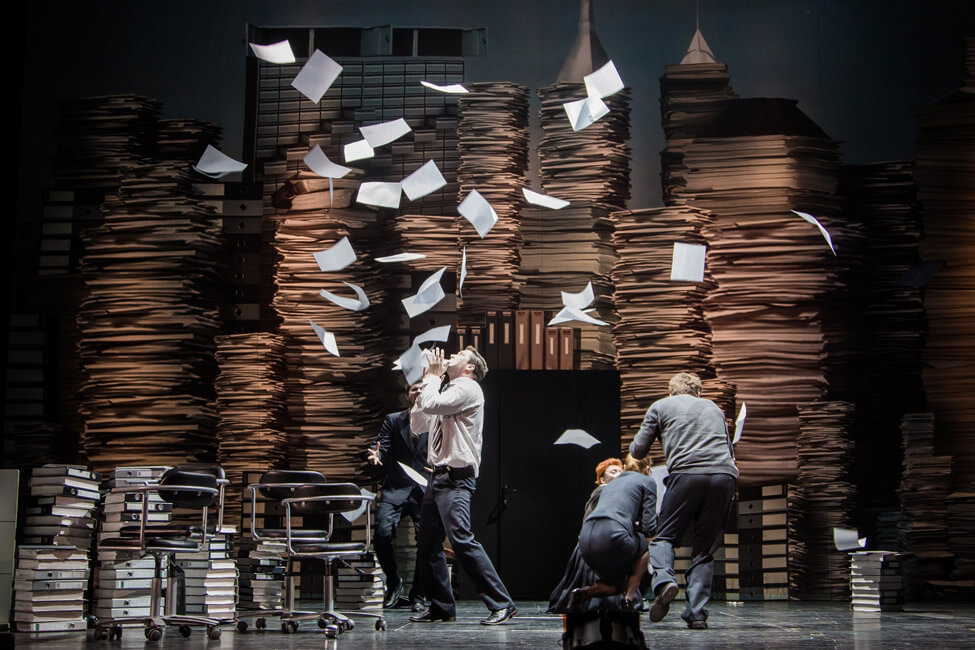 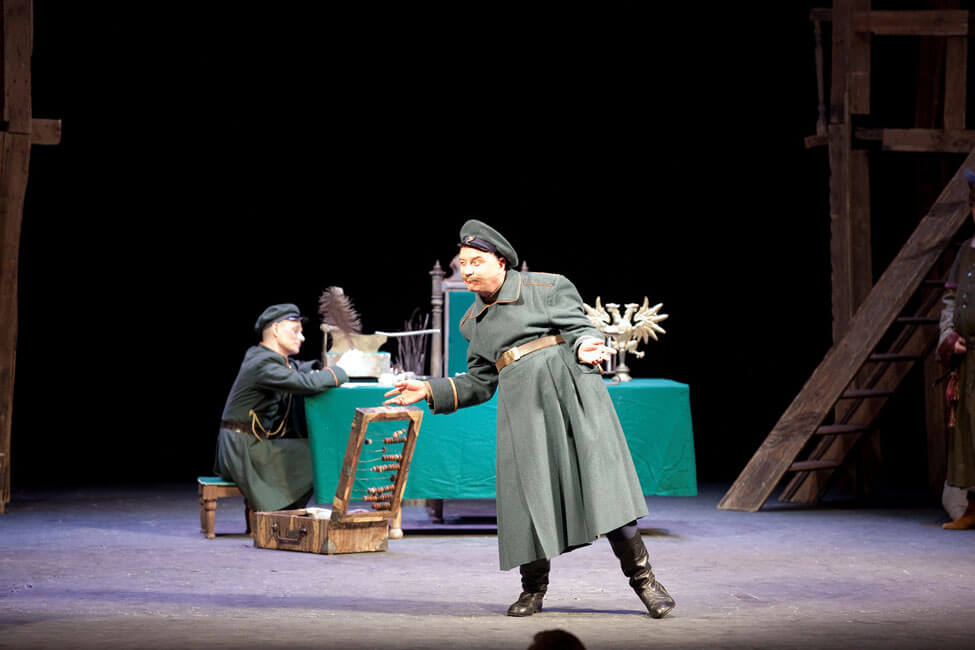 The new season starts with the opening of the Chamber Stage, a venue for small performances, which seats 90 spectators. A few premieres will be presented to the audience, including Šabany after the same-titled novel by Alhierd Bacharevič, Antigone after a play by Jean Anouilh, and ART after a play by Jasmina Reza.
← Back to list